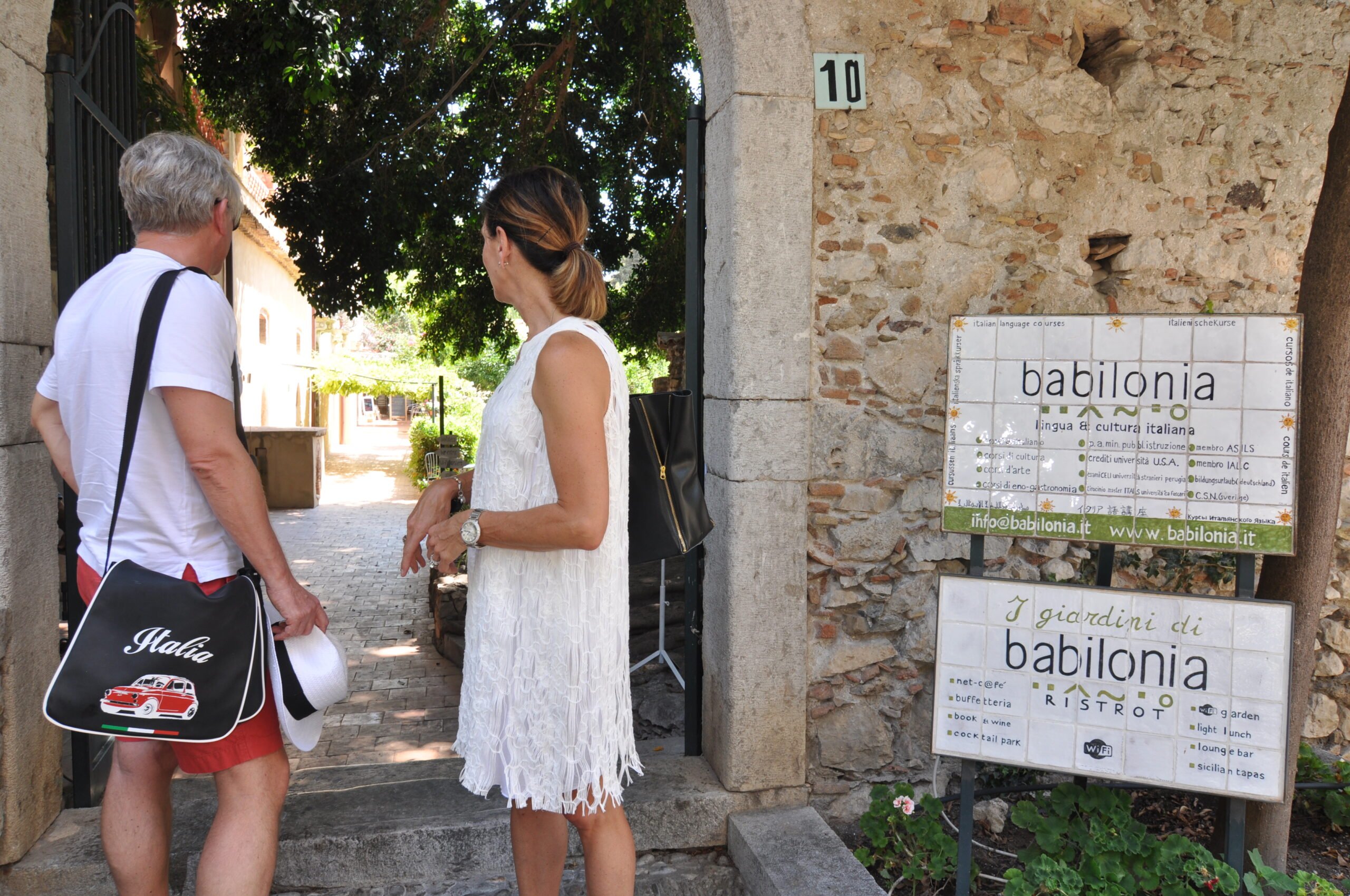 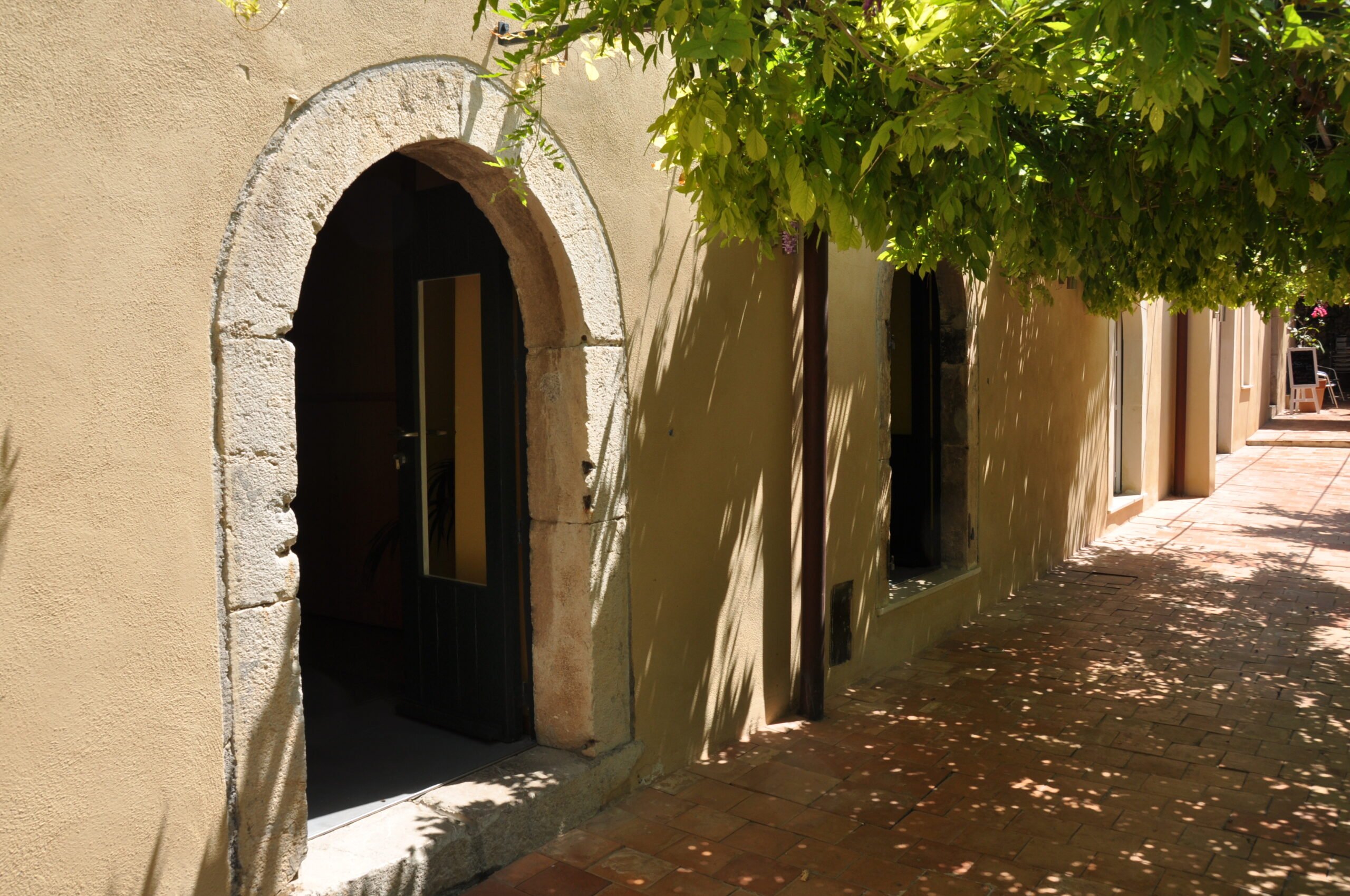 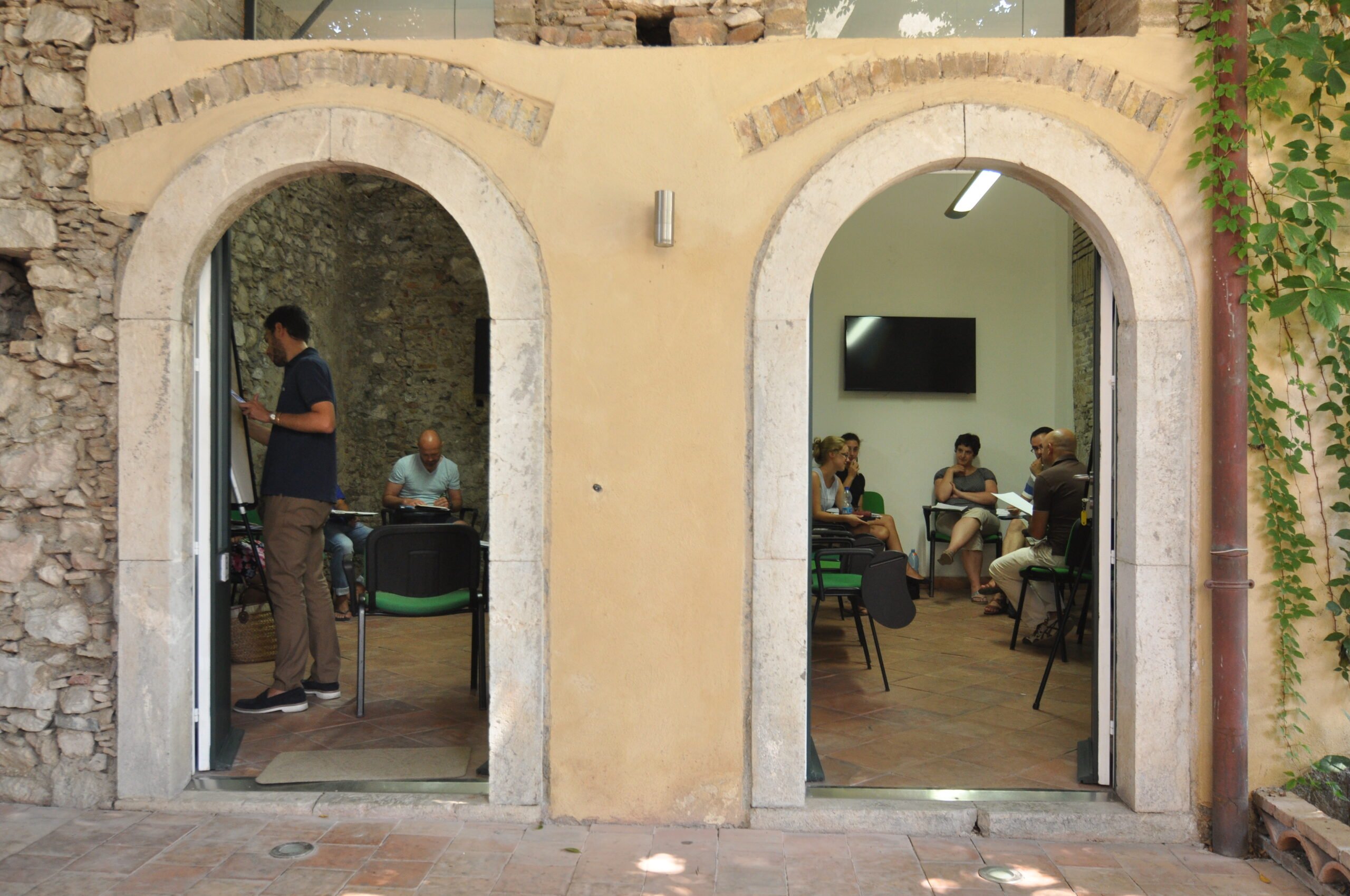 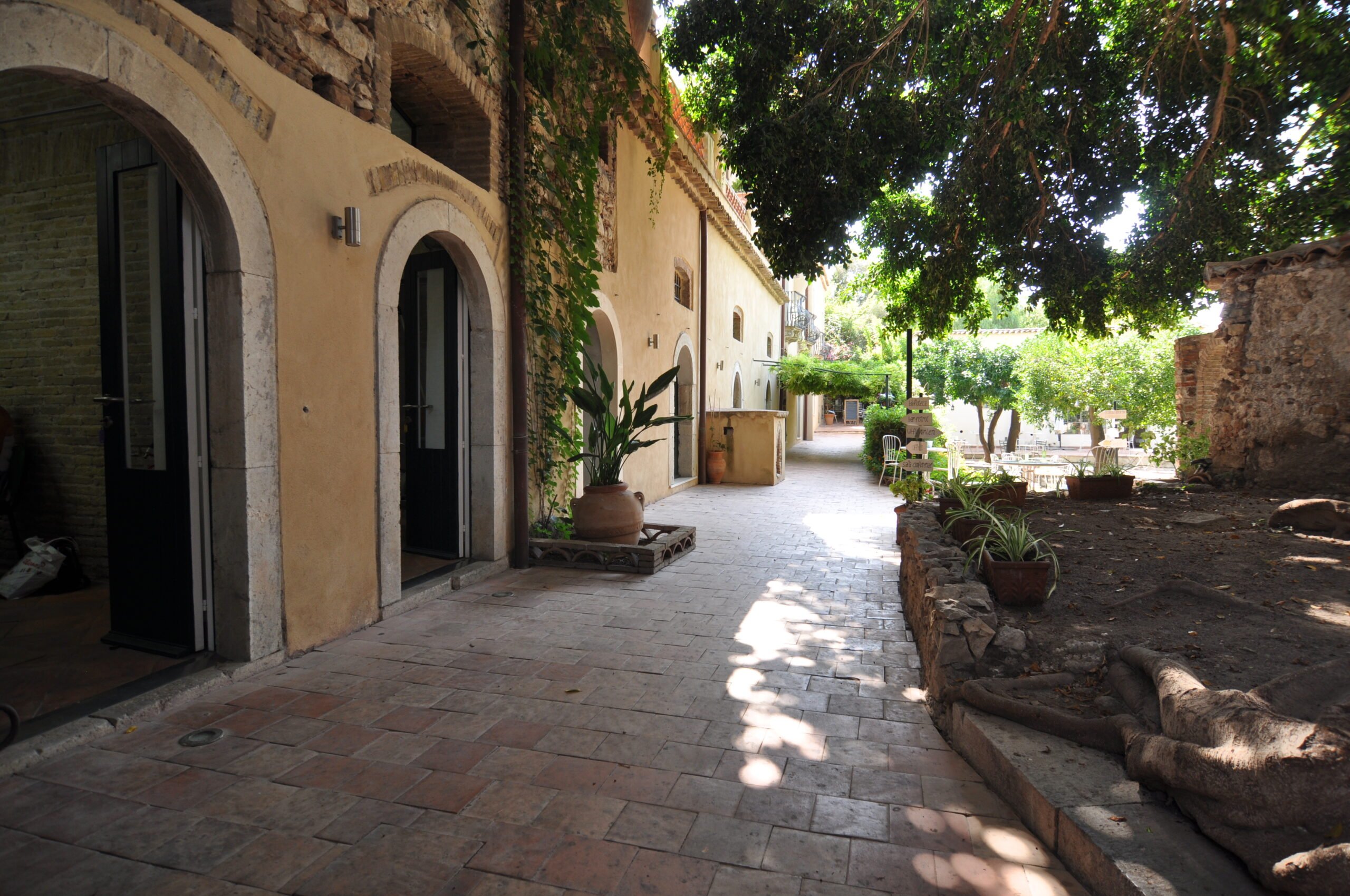 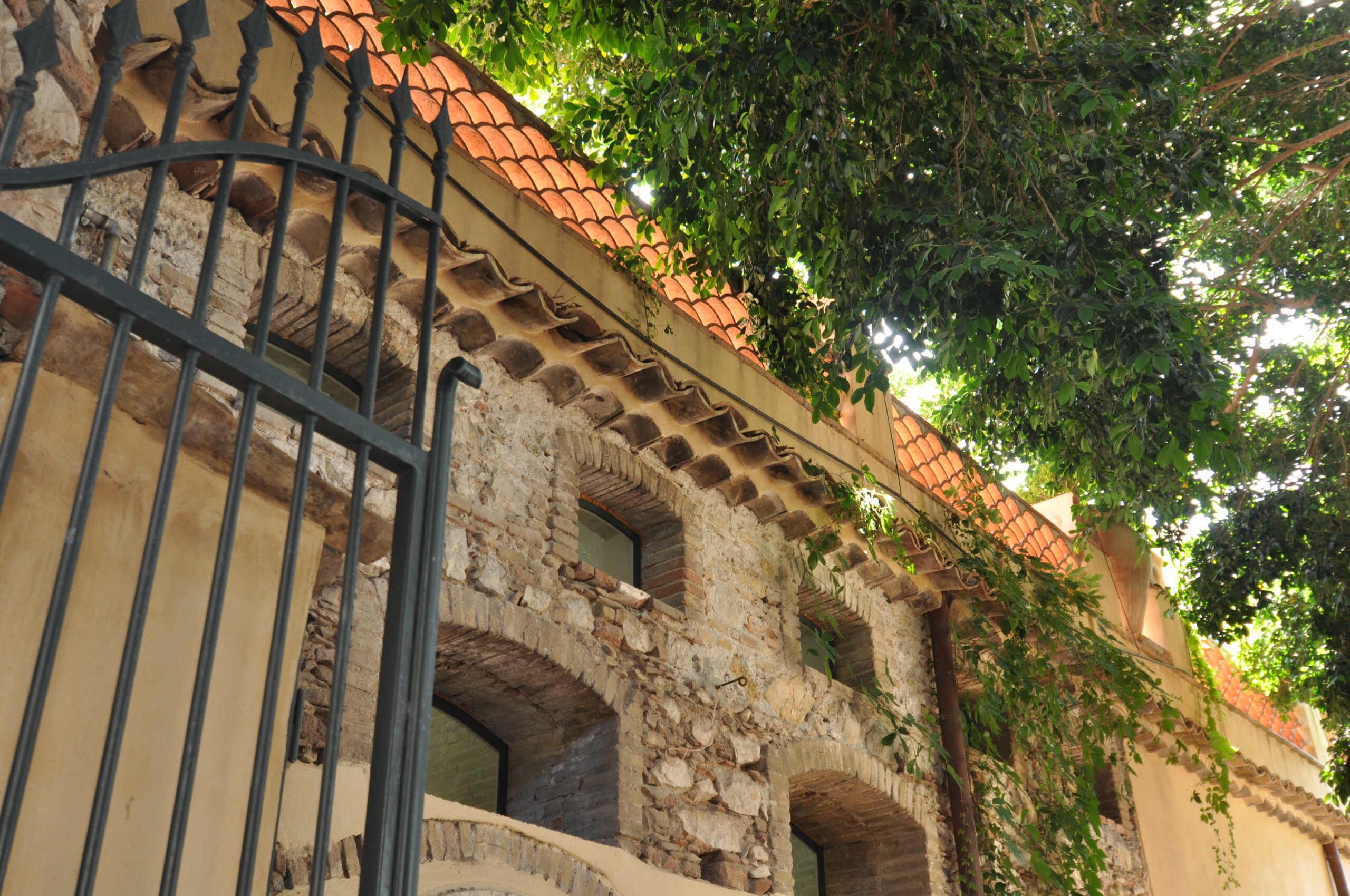 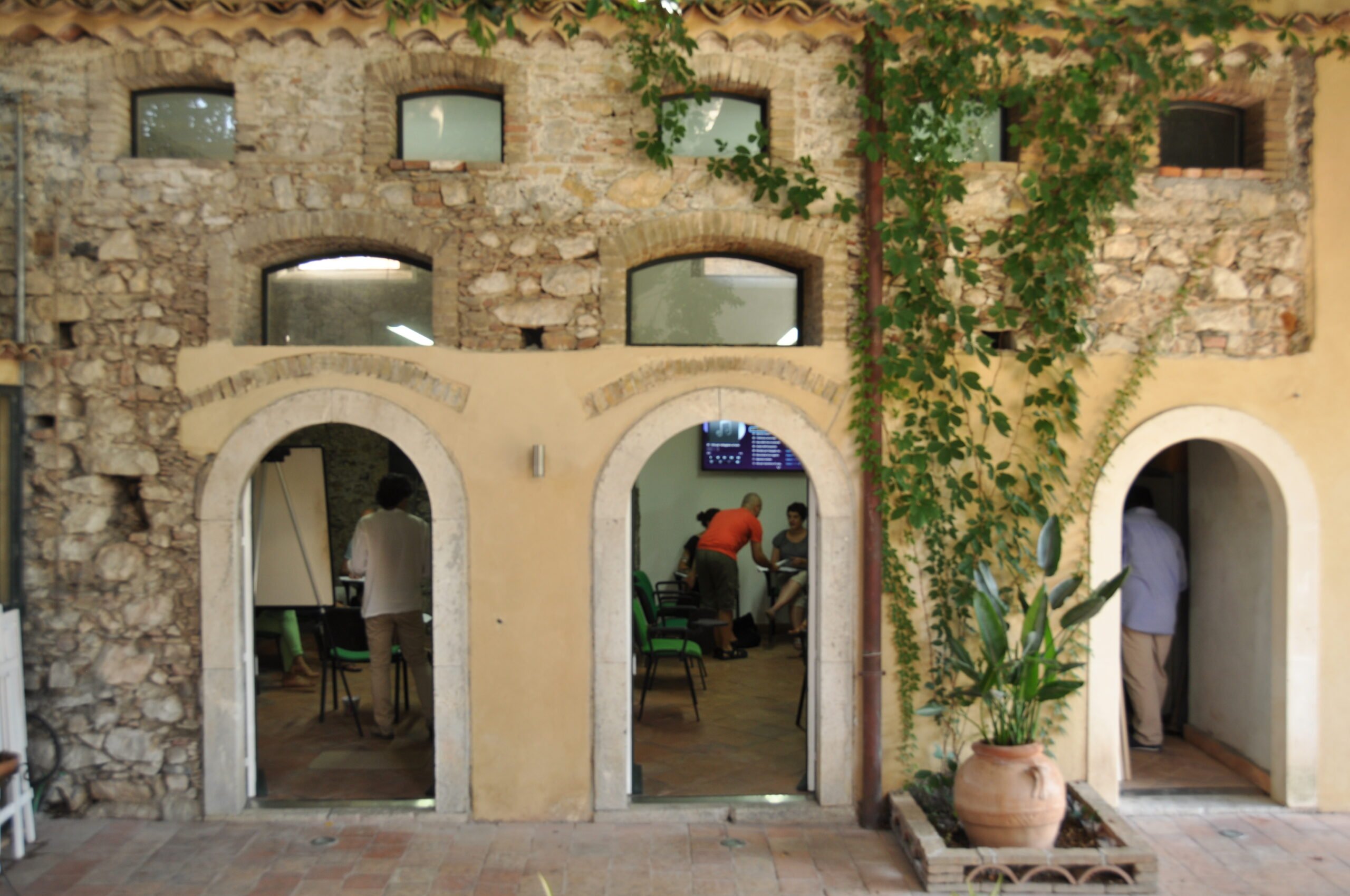 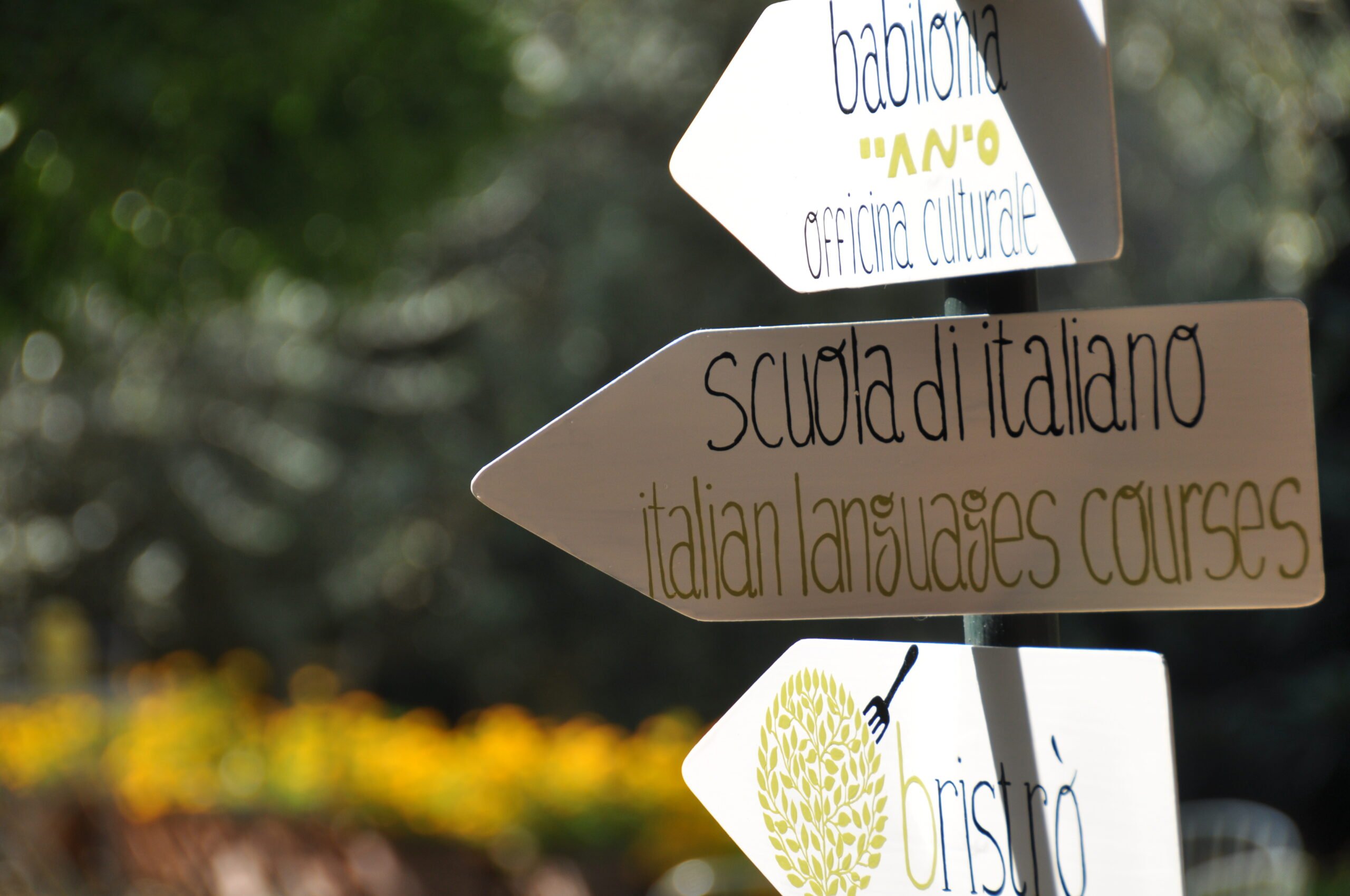 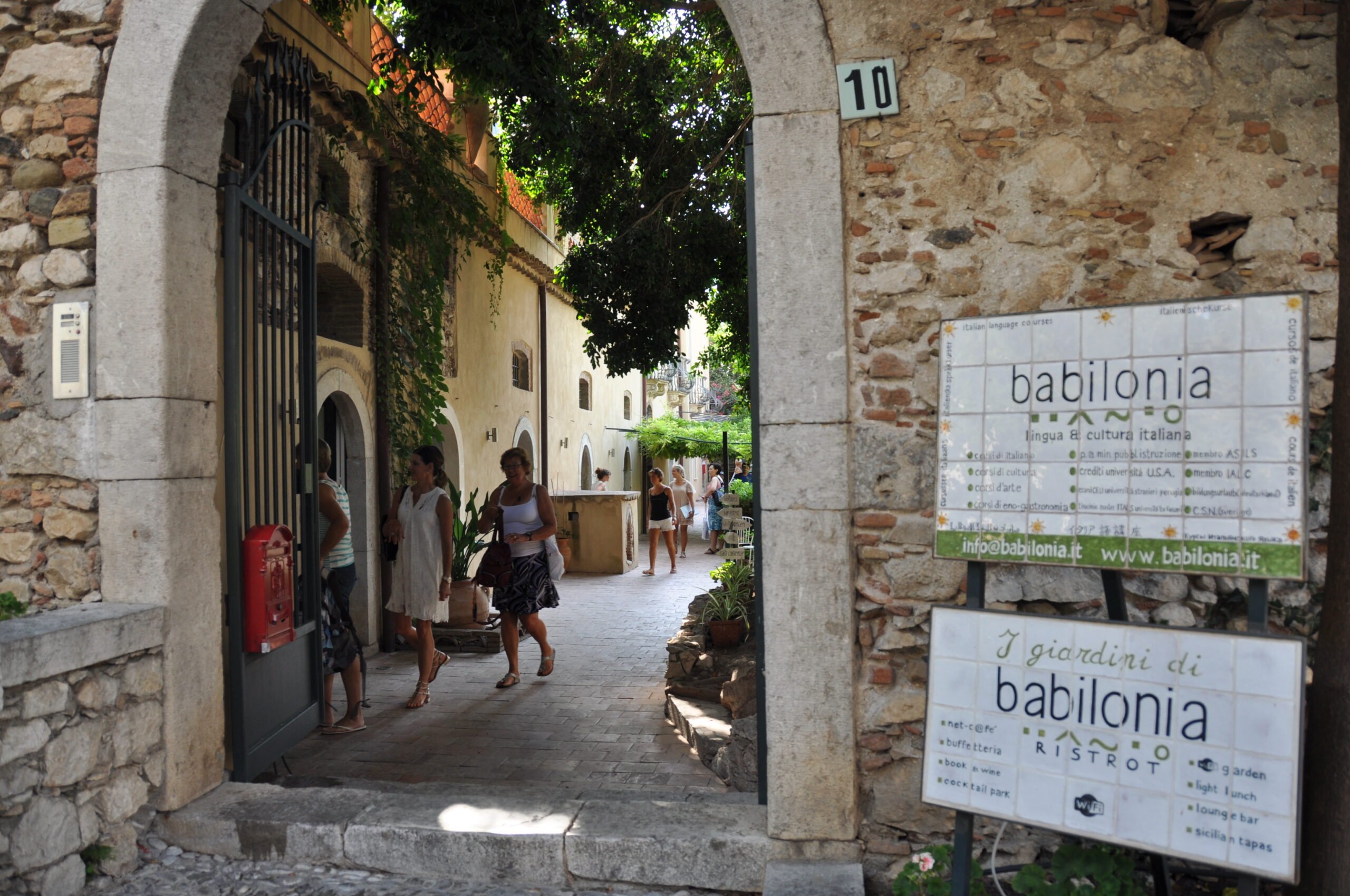 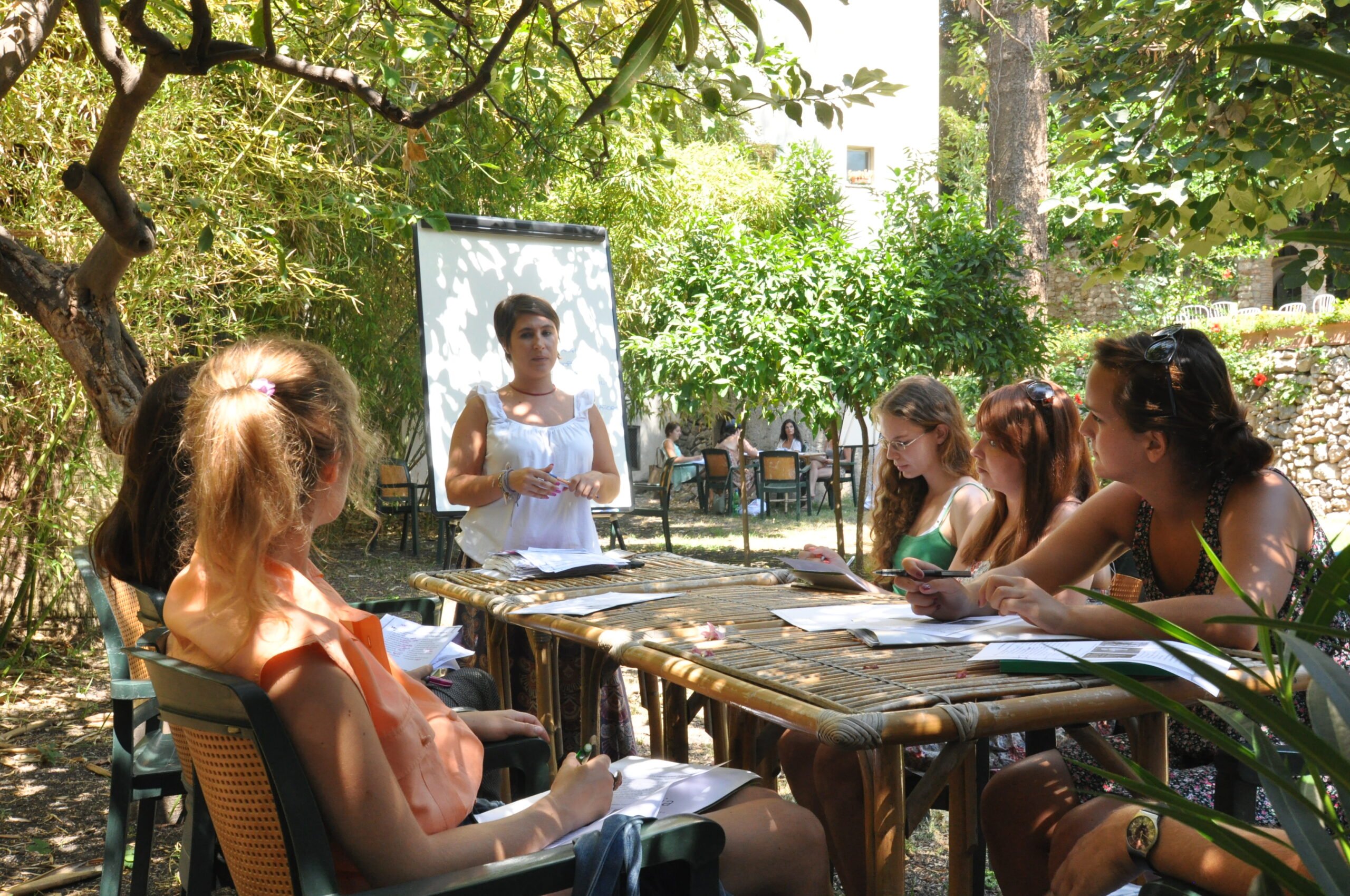 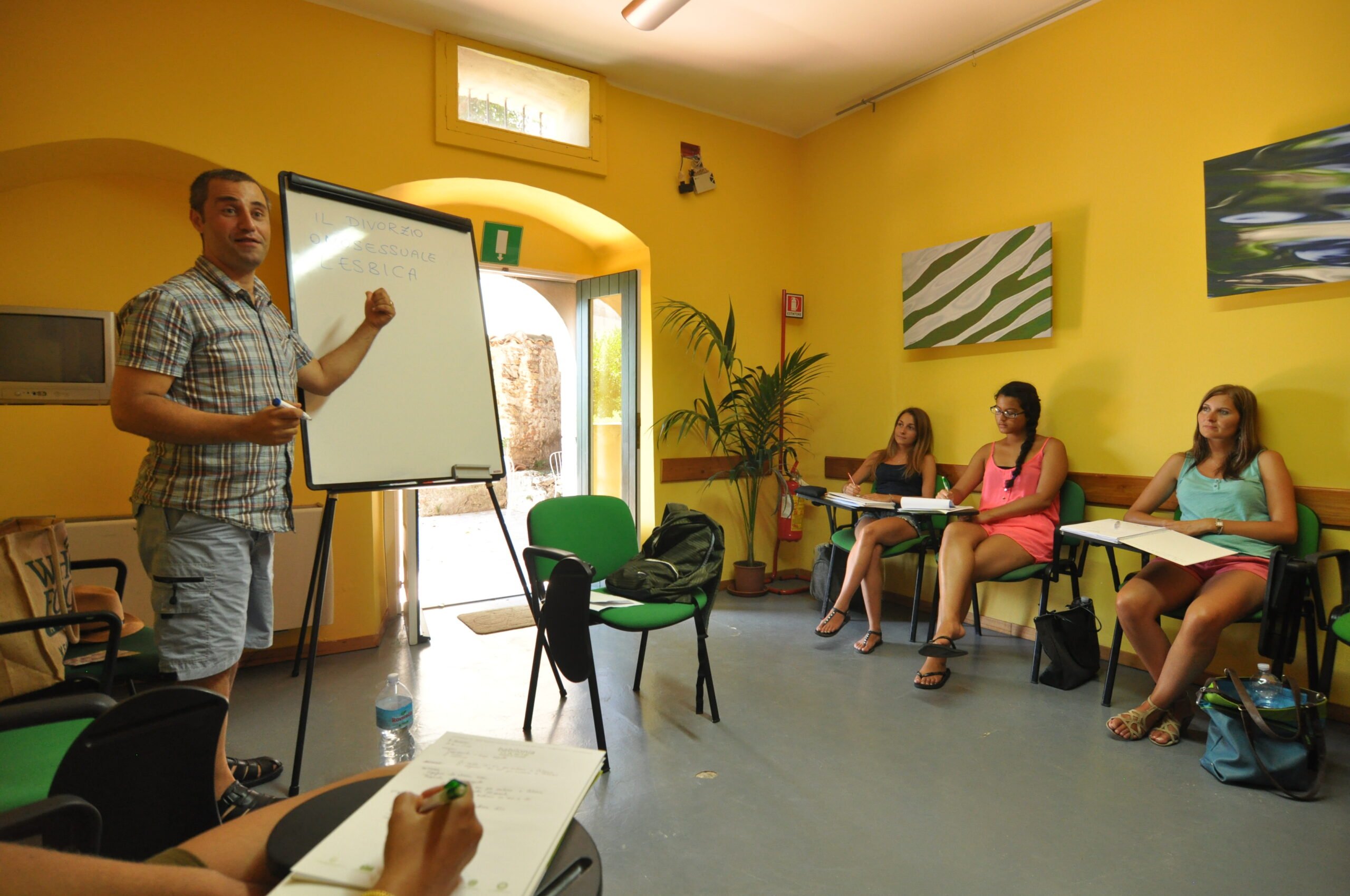 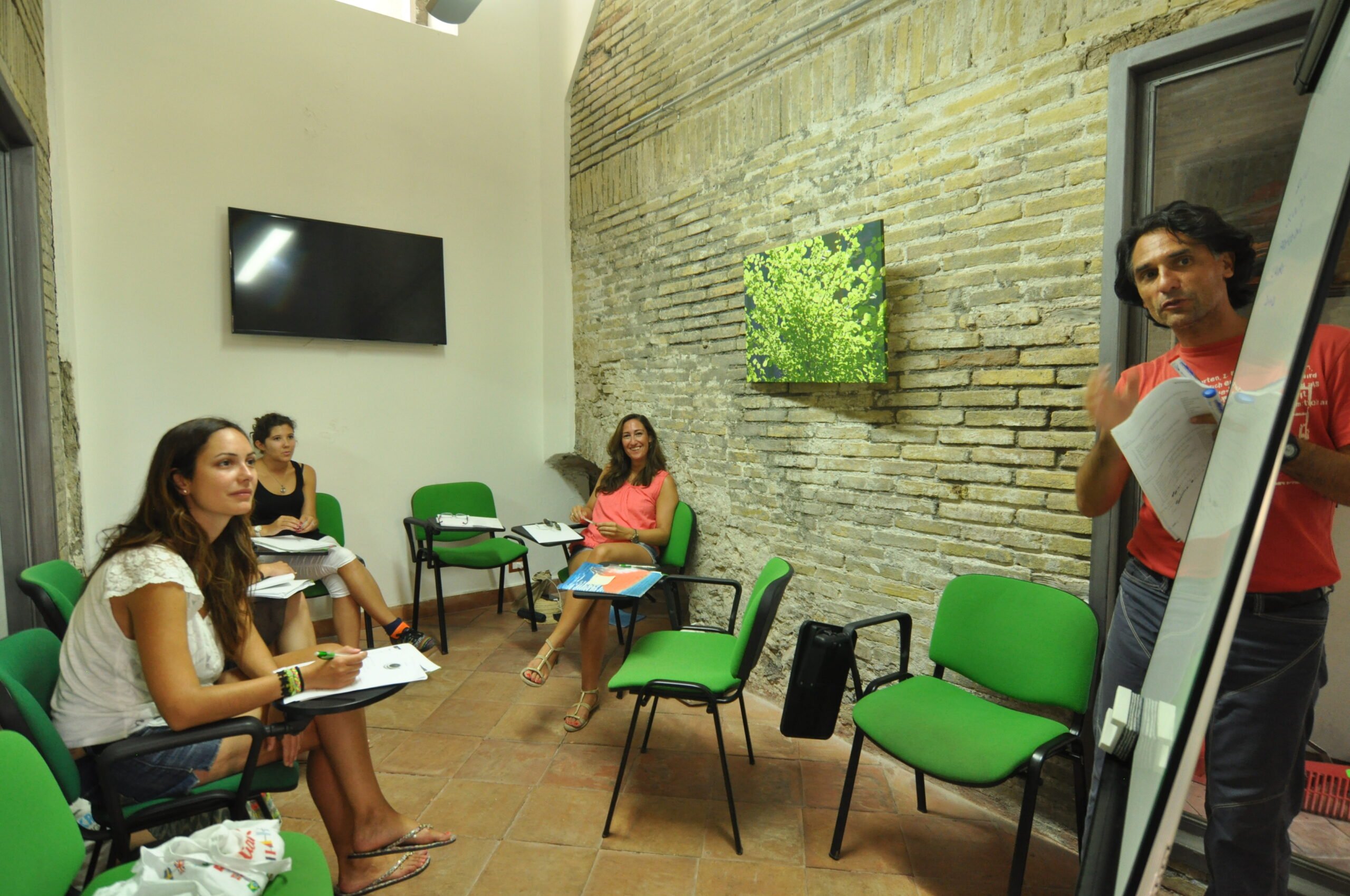 When our students arrive at school for the first time, they roll their eyes. They figure that they must have wandered into the wrong place. There’s no way that a school could be housed in this paradise, immersed in a garden featuring trees of all kinds: orange, mandarin, grapefruit, medlar, and palm; with plants and flowers of all colors and an intoxicating scent of wisteria … This cannot be a school, this is a corner of paradise!

But yes, every day we work in this corner of paradise: a true oasis of peace and beauty, in the heart of Taormina, between the Greek Theater and the main street, Corso Umberto, immersed in the Archaeological Park of Taormina, floating in history: the ideal place to attend an Italian course in Italy!

This paradise is called “Casa Silva” and is the prestigious home of our Italian language school and its Italian courses. In its lush garden our students can study, relax and meet with school friends or, if they need to work, take advantage of the internet-c@fé and free Wi-Fi.

Many students who have studied in various Italian schools have called BABILONIA the most beautiful Italian language school in Italy and we … are so proud of it!

What our students say about us

Thanks a lot, I will come again!Alice

I’m usually a very critical person, but I can not think of one thing that could have improved my experience. If you want to jump-start your Italian language skills to the next level, attend Babilonia!
Matt Rocco, USA, 2 week standard plus course, January 2019

BABILONIA is truly a dream. From the staff and management who are absolute angels to the wonderful, simply amazing teachers, all in a fabulous place like Taormina … what more could you ask for? I had the great fortune to spend two weeks there for teacher training course (through AATI) and it was the best professional development I have ever had in my career as a teacher. ❤ If you have a chance to come here, do it – everything about this place is NUMERO UNO! (Kristin Fisher)

BABILONIA is truly a dreamKristin Fisher

The school is extremely well run. I’d like to suggest some improvements but I can’t think of any. A great place to learn Italian in a friendly atmosphere with professional and dedicated teachers and staff. (Mark Holden – UK, corso standard plus 30.06 – 11.07.2014)

“Casa Silva”, home of our Italian language school for foreigners, is subject to certain requirements by the “Sovrintendenza alle Belle Arti”, the National Agency that protects historic and artistic buildings. In the past, in our school’s 1,000 sqm garden, an integral part of the Archaeological Park of Taormina, ancient Greek and Roman coins have been found and traces of Roman bricks are still evident.

“Casa Silva” is an ancient patrician villa in the heart of the historical center of Taormina built around the beginning of 1800s: one of those architectural and naturalistic jewels that Taormina still miraculously preserves. “Casa Silva” is surrounded by an impressive stone wall that separates it from the beautiful staircase of via Timoleone.

Built in the 1800s in the park that, at the time, also included the current Public Garden, the historic villa which once belonged to Lady Florence Trevelyan – wife of prof. Salvatore Cacciola, the real owner of Casa Silva – the English noblewoman who made the fortunes of Taormina attracting, with her presence, the noble European aristocracy in town.

The story of Lady Florence Trevelyan is an interesting and compelling historic tale: a real love story, British style.

After the death of her mother in November 1877, Florence finally arrived in Sicily, the final stop following two years of travel throughout Europe, with her cousin Harriet Perceval. Before leaving England, Florence lived in Balmoral Castle, and was close to Queen Victoria, after the premature death of her husband, Prince Albert. She lived there until she was accused of having an adulterous relationship with her son, Prince of Wales and future King Edward VII. Thus, in order to avoid the scandal in Victorian and Puritan England and at the behest of the Queen herself, she was forced to leave England quickly and permanently.

She then settled in Taormina, where she arrived in 1884, and lived in exile with a substantial royal annuity for the rest of her life without ever returning back to England.

In 1890 she married the town doctor, Dr. Salvatore Cacciola, who was Mayor of Taormina for many years. Over time she bought some land along the slopes of Taormina, and undertook the creation of an English-style garden, that she called “Hallington Siculo”. From this garden, nowadays Villa Comunale di Taormina or Parco Duca di Cesarò, you can enjoy the breathtaking view that has made Taormina famous throughout the world, a view that goes from the coastline to Mount Etna, embracing the whole bay of Naxos. In her garden were placed several species of rare plants and the garden itself was adorned by small fanciful buildings, the so-called Victorian Follies, built with bricks and different kinds of stones, an architectural theme that is also found today at “Casa Silva”, home of our school.

n 1890, Lady Florence Trevelyan bought Isola Bella, the small island overlooking the beach of Taormina, linked to the coast by a narrow sandy isthmus. Here she build a house and a garden. In addition to varieties typical of the Mediterranean climate, she planted non-native species and rare shrubs so that the island would soon become home to various seabirds and interesting lizards.

During her life in Taormina, Lady Florence Trevelyan imported many exotic plants, not yet known in Taormina, from the southern hemisphere, such as Araucaria, Calliandra, and Bahuinia. The Villa Comunale and the garden of “Casa Silva”, our school garden, still boast a lush garden, embellished by the presence of citrus trees and Mediterranean essences as well as centuries-old palm trees, araucarias, magnolias and other towering trees.

A gigantic Araucaria tree and a centuries-old Ficus Benjamina tree actually overlook the garden of our school, a presence that binds us inextricably to the history of this city!

Simultaneously impressive and elegant, Casa Silva reflects the personal eclectic taste of Lady Florence Trevelyan. The same style later used in the Public Garden’s architectural “folies” (the brick and pumice lava towers) and with the same combination of the materials.

Here's what Casa Silva was like in the 50s

“Casa Silva” is also the name that Kurt Pinkl and Wilhelm Goetz – two young and creative Austrians – used for their world-renowned fashion house, making the name of the ancient Taormina villa, for a long time their home and art-studio, famous in the haute-couture international environment.

This is the story of the two young Austrian creatives who lived at “Casa Silva”: several years before the outbreak of the Second World War. At that time Kurt Pinkl and Wilhelm Goetz opened one of the most elegant and trendy fashion studios in Taormina, frequented by members of that “beautiful world” that had its buen retiro in the small town perched on the slopes of Monte Tauro. Silks, chiffon, brocades, velvets and taffeta, embellished with precious stones, gold and silver embroidery, sequins and pearls, were transformed by the skilled local laborers employed by the talented couple of stylists into luxurious stoles and refined jackets, sumptuous evening dresses and precious clutch bags, along with gloves and foulards, essential accessories for the chic ladies of the era”.

Now, the onus is on our Italian language school to revive the honor of this palace that is an oasis of peace, culture and creativity of years gone by.

In addition to offering Italian courses for foreigners, at Casa Silva, BABILONIA operates as a Cultural Center hosting book presentations with authors, cultural meetings and debates, jazz and classical concerts, art exhibitions: a Cultural Center where our students – foreign italophiles – can meet the local people of Taormina who participate in these events, with the possibility of having a wider social and cultural experience and better chances to integrate with the local community.

Some videos of cultural activities
And if you are hungry ...

… do not forget the Ristrot “I Giardini di Babilonia” that operates inside “Casa Silva” and that offers our students, not only breakfasts and lunches at special student prices, but also beautiful moon and star lit events.

The same chefs of “I Giardini di Babilonia” offer our cooking courses and tasting programs on foods and wines of Sicily for an eno-gastronomic experience of Sicily that complete the language and culture programs, as it is true that you travel not only with your eyes and mind but also with your belly!

We are happy to welcome you to our historical school and our beautiful garden for an Italian language and culture course, we look forward to seeing you here in Taormina soon!

Homo accent
Here everything comes alive. Also our logo!
Louise, we love you :-)
Louise Botten talk about her experience studying in Babylon. When she arrived she did not speak Italian, after six months...
Sicily… and Babilonia
Go to Top
Book your corse with confidence!
FREE CANCELLATION POLICY & FLEXIBLE TERMS
Ask for more info now!
You can unsubscribe at anytime.

Powered by Convert Plus