Spring Has Sprung! A Walk to Babilonia 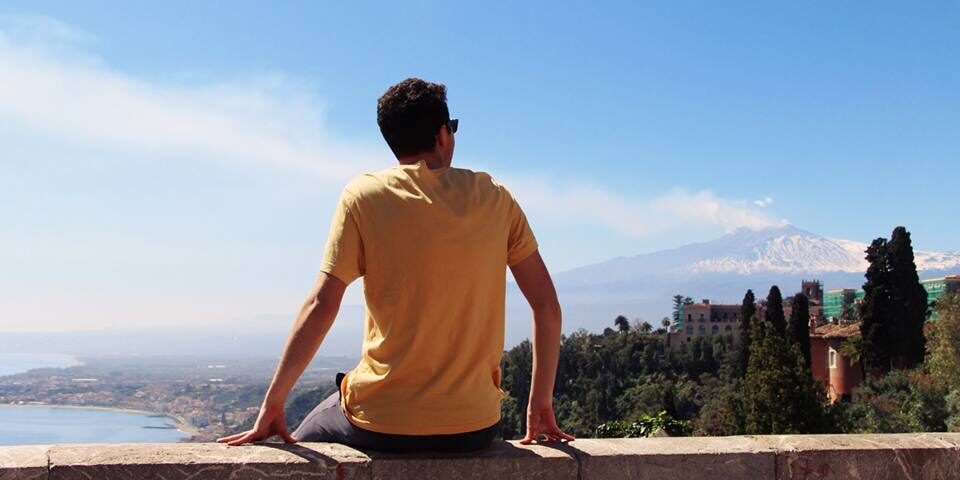 As my semester abroad studying Italian language and culture at Babilonia comes to an end, I have noticed a change in Taormina. The place that I have called home for the past four months has been coming to life.

In perfect polyphonic harmony with the blooming of the almond blossoms, wisteria, and plumeria, the store fronts of Taormina have been slowly opening their saracinesche to welcome in throngs of tourists after a sleepy and tranquil off-season. Just before walking down Corso Umberto from the northern most entrance, Porta Messina, I see long strings of marveled sightseers flowing out of buses orange, white, and blue, eager to see what this town has to offer. Attracted by the ancient portal to the city inviting all to tread the Roman decumanus, where the centuries-old buildings still stand tall, now housing trendy clothing stores, boutiques, and eateries, most head up the slightly inclined Viale San Pancrazio and enter the centro storico. Little do they know that this street’s namesake church lies in the other direction right down the hill.

The Chiesa di San Pancrazio dates back to the 18th century and is a modestly baroque church sitting on top of the ruins of a Grecian temple dedicated to the ‘ruler of mankind,’ Zeus. This is an example of the omnipresent stratification that took place here as a result of the numerous dominations in Sicily. I like to think of this land as a parfait, featuring diverse, at times strongly dissonant, flavors of yogurt, Greek, Roman, Spanish, French, Swabian, Bourbon, to name a few, that all come together to make one chaotically beautiful and delicious treat that we all get to enjoy.

Do you want to know more about

Immigrant from modern day Turkey, San Pancrazio became a bishop and fought ardently against the pagans for his beliefs up until his martyrdom. Today, San Pancrazio is the patron saint of Taormina and has been immortalized by a stunning statue from 1885 located inside the church. With this site under your belt, you can head up the street and walk through the same stone archway San Pancrazio did two thousand years ago, Porta Messina.

You are now on the main street of the town, Corso Umberto. Immediately on your left you will see Via Zecca. On this street, as there was one in every polis, lied the mint, where the ancient Greek coins of Tauromenium were made. Nowadays, at the end of Via Zecca lies my favorite café/wine bar ‘Vicoletto,’ always equipped with the regional newspaper La Sicilia and rich, local wines such as Nerello Mascalese or Nero d’Avola. Here you can indulge in great food and drink while chatting with the friendly owners; be sure to let them know you study at Babilonia to get your 10% discount. Now head back over to Corso Umberto and take a quick stroll down the pedestrian street into the piazza.

The piazza so nice they named it thrice. Officially Piazza Vittorio Emanuele II or Piazza Badia, and at times colloquially referred to as Piazza Taxi, this square functions as a meeting place, coffee spot, and, incidentally, a taxi hub. On the right hand side stands the Corvaja Palace. Like the Greek Theater, this site is an important symbol of Taormina, demonstrating the architectural prowess of the various former inhabitants of the city. Construction began here between the 10th and 11th centuries by the Arabs with the completion of the central tower. Over the centuries and different dominations, many more wings were added. The building remained the same for ages. Then on July 9th, 1943, the city of Taormina was bombed by the allied forces, razing to the ground many of the most important buildings. One of them was the Corvaja Palace. Fortunately, architect Armando Dillon stepped in and restored the building to its former glory.

Turn left down Via Teatro Greco. Resist the urge to buy those ghastly Godfather aprons and walk straight ahead until you arrive at the large descending staircase located on your right hand side. You are now on Via Timoleone. Before you tread down the stairs, look straight ahead, over the trees and buildings. If you still can’t see anything, take a step onto the little ledge. This is your first glance of Mount Etna. He is no ordinary mountain. He is an 11,000 feet tall, active, snow-capped stratovolcano. On an average day, he leaves long streams of gas, cloud-like in appearance, that dominate the skyscape. He is the natural smokestack of the island, perpetually huffing and puffing, a seemingly impossible marriage of cold and hot, a looming threat to the hundreds of thousands of mortals living at her feet. He is a contradictory being, providing abundant life to the crops grown from his volcanically enriched soil, but simultaneously a ticking time bomb, capable of taking life away as quickly as he provided it.

Head down the staircase, mind the fallen oranges, and, half-way down, make a left through the gate with the Babilonia sign next to it. Welcome to the garden of the Babilonia School! Tucked away from the heavily trodden streets of Taormina, the school’s gardens seem more like a nature reserve than a school. Boasting diverse trees such as a ficus benjamina that has been standing tall for centuries, and fruit trees bearing delicious oranges, grapefruits and mandarins. The silviculture of Casa Silva, the original name for the school’s current structure, is exceptional, and provides a peaceful setting for outdoor lessons. Learning in a building older than the city of Chicago, with ruins that date back to the ancient Roman Empire, inevitably cause you to muse on the legacy that characterize this enchanting place.

Is that your stomach I hear growling? I know. All of this walking has gotten you hungry. Stop in the Ristrot hosted in the school garden, I Giardini di Babilonia, and enjoy a traditional Sicilian dish. Pasta alla norma. Insalata caprese. Risotto frutto di mare. Spaghetti con le cozze. Here you can be sure that your meal will taste as good as its setting is beautiful. The Ristrot also offers special student discounts and often caters cultural events in the evening time. Additionally, the same chefs that prepared your dishes also teach cooking classes and host food and wine tastings. If you feel so inclined, stop by again for an informative, eon-gastronomic experience.

These are just a few of the things that we Babilonia students get to enjoy on a daily basis. In reality, Taormina has even more to offer than the few sites I listed above. There is the Greek Theater which over looks the entire east coast of Sicily with views of Mt. Etna in one direction and Calabria in the other, fostering a truly unique pathos that set the stage for Greek tragedies over 2,000 years ago and that continues to tug at the heart.html strings of concert goers in the summer months; there are the Naumachie, an ancient gymnasium, once adorned with statues of Greek-Roman deities and elaborate fountains, it is now a historical promenade running parallel to Corso Umberto, providing shade from the sun and a break from the busy street above; there is, of course, Isola Bella, an extremely biodiverse islet, barely connected to the beach by a sandy isthmus, sitting just below Taormina, it is accessible by cable car, bus, or your own two feet.

Taormina has provided inspiration for scores of literature by some of the greatest authors in history. Capote, Goethe, Wilde, Cervantes, Hemingway, have all called Taormina home for a period of time. I feel very fortunate to have been afforded the opportunity to take in the same landscapes, taste the same cuisine, and bear witness to the same churches, that these literary virtuosos did years ago.

Alright, enough pettifogging descriptions. I don’t want to spoil this special place for you. I’ll leave the rest of the town a mystery. It is now up to you to come and see it with your own two eyes and judge it for yourself. Just don’t be mad at me if you end up not wanting to leave.

It may also interest you:

Taormina, Sicily is an ideal location to study abroad for a semester or yearlong program for the student who is interested in total immersion into the Italian culture and language. Host families extend learning during relaxed dinner conversations during the traditional Sicilian meals provided.

Studying Italian in Sicily Beyond any Stereotype!
30 April 2019

Thanks a lot, I will come again!Alice
Download our brochure