What to do in your free time in Taormina 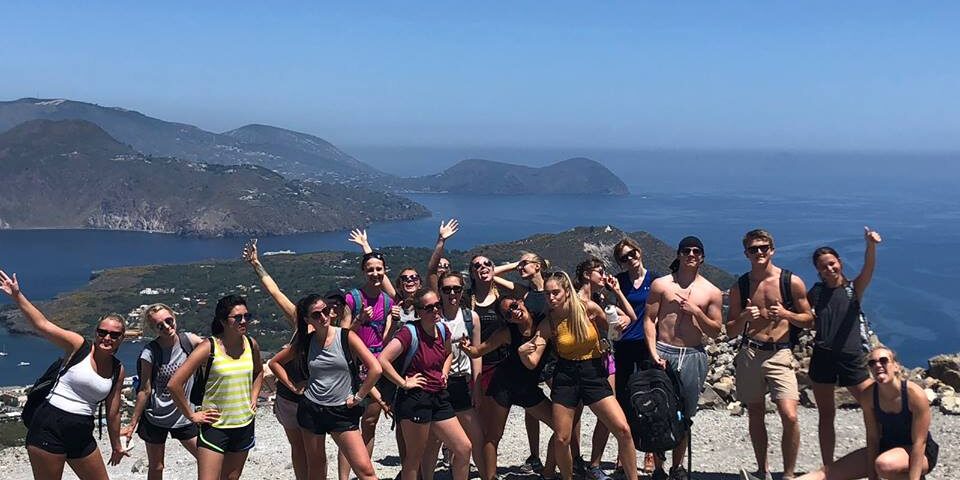 Let’s face it. You aren’t coming to Sicily just to study. The pristine beaches, tropical climate, breathtaking landscapes, and cannoli galore play an important and fundamental role in your decision to haul your portly luggage over to this strange, triangular island. Although small, Taormina and the surrounding area offer a plethora of fun activities that allow you to take advantage of all of the amazing things that this unique Italian region has to offer.

During my four months here, I have had a few pastimes to relax from schoolwork. From the traditional, evening passeggiata down Corso Umberto, to playing soccer in the Stadio Bacigalupo di Taormina, there is a wide variety of ways to spend your time here. Here are some of my favorite:

La passeggiata, Italian for, ‘the walk,’ is a nightly activity where flocks of families stroll down the main street of the town, often dressed to the nines, showing themselves off to the world and observing all who amble along. Chitchatting with passerby, enjoying the company of a walking partner or two, one appreciates the purpose of the simple things in life, like a tranquil saunter under the golden, evening rays. Stops along the way in a gelateria or bar for a sweet and locally sourced pistachio ice cream cone or a quick, caffeinated pick-me-up are not uncommon occurrences either. Moreover, marking the end of the work day and the start of dinnertime, la passeggiata is not simply a time of relaxation, but also a fundamental interlude between one act of the day and the next; a kind of intermission in the opera of one’s life, where the orchestral members sashay up and down the aisles of the concert hall after an hour of trumpet-tooting and timpanitapping and have a tête-à-tête with the audience members before heading back to the pit to play the final act of the evening.

Do you want to know more about

There’s no better end to an evening than some delicious Italian cuisine. After your leisurely promenade, head over to one of Taormina’s many restaurants and treat yourself to dinner. Some spots that consistently serve toothsome, authentic, Sicilian cuisine are Tiramisù (there are two on both ends of Corso Umberto), Osteria da Rito, and our own I Giardini di Babilonia, where you can find refuge under fruit trees and wisteria. However, I must say, most restaurants in Taormina do a pretty good job so you should be safe wherever you end up. Just be aware that any place on the Corso or on the beach front is likely to be more expensive.

During your passeggiata, you will inevitably encounter a multitude of churches that will draw your gaze for their beautiful simplicity. These places of worship are quite easy to spot, like the medieval Cathedral in Piazza Duomo, adorned with swallowtail merlons, or the Augustinian convent turned public library in Piazza IX Aprile (where I did my internship!). Others are a little off the beaten path, like the so-austere-you-couldn’tbelieve-it’s-baroque Ex Chiesa di San Michele overlooking Mt. Etna and the azure Ionian sea, or the Chiesa di San Antonio, home to a permanent nativity scene. These forgotten, centuries-old churches lying at the end of cobblestone staircases and urban precipices cause one to reflect on the importance of taking a break and finding peace in life, with or without the aide of religion.

Soccer in the Stadio

One of the 15 weirdest fields in the world according to FoxSports, the Stadio “Bacigalupo” di Taormina is a unique place to play some soccer. Named after the talented calciatore, Valerio Bacigalupo, this soccer field hosts matches between many local soccer teams, but it is also open to those who don’t possess the skill set to compete in an organized league and just want to have fun – I, for one, certainly fall under that category. Do not freak out if you see metal boxes floating above you as you play or spectate, flying cars have not been invented yet. What you are looking at is the cable car or funivia of Taormina, connecting the city center to the famed beaches of Isola Bella and Mazzarò.

Every 15 minutes, four cable cars glide the 725 meters down to the beaches of Mazzarò and Isola Bella. For a few minutes, you can be a Greek god and fly above the mortals, surveying their twisted olive groves, shingled roofs, and satellite dishes. Shortly after the beginning of your descent, look down at the soccer field below, maybe you’ll be able to steal a glance of a pick up game. I’ll never forget the time I was riding a cable car down to the beach and I saw one of the kids on the field take aim at us with his soccer ball and punt it straight in our direction. His precision surprised me, he must have done it before. THUD. Remarkably, the projectile hit its target. Us. It boomeranged off of our cable car’s window and landed inches from where it had just been kicked. In order to prevent the occurrence of situations like this, the funivia generally closes during official games, however not during practices and unorganized matches. Since I have been assured that a mere soccer ball, 8.5 inches in diameter, poses no risk to the safety of this journey, I invite you to keep your eyes peeled for this youngster and his friends, and hope that their need to show off their bravura calcistica doesn’t sway you, or your cable car, the wrong way.

Taormina is surrounded by beaches, each one with its own flare. The most famous and, in my opinion most alluring, is without a doubt Isola Bella. Italian for ‘beautiful island,’ a subtle isthmus connects the pebbly shoreline to this exotic islet. Once a paltry outcrop jutting up from the seabed, the biodiversity and geoarchitecture that characterize Isola Bella compose its oneiric aesthetic that have been stealing the hearts of tourists since Lady Florence Trevelyan bought it in 1890. Look out for the countless birds and the endemic lizard species, the Podarcis Sicula Medemi, although similar in appearance to the typical Sicilian lizard, this extremely rare reptile can be distinguished thanks to its dark red stomach. A few, only slightly less touristy beaches are Mazzarò, Naxos, and Letojanni (don’t mind the landing paragliders). All of these beaches are lined with restaurants and bars, many of which will bring drinks right to your beach chair!

I am using the word ‘hiking’ very loosely here, but there are two, main, easilyaccessible destinations that you can trek up to: the medieval citadel, Castello Saraceno (the Sanctuary of the Madonna della Rocca is also right before this), and the scenic town of Castelmola, perched high up above Taormina with breathtaking 360˚ views. Castelmola, officially recognized as one of the most beautiful villages in all of Italy, is Taormina’s acropolis. A few sites that are absolutely must sees are the Bar Turrisi, filled with particular apotropaic decorations, the Castello Mola, and the Duomo. Any of these locations allow you to take in unparalleled vistas while enjoying the small town charm that is Castelmola’s claim to fame.

The Greek-Roman Theater of Taormina, in my opinion, is the most beautiful in the world. The pathos evoked by the surrounding landscape transforms any show into an emotional journey. It is no wonder that artists such as Elton John, Tracy Chapman, Sting, Pooh, and Elisa chose to perform there. As the second largest theater in all of Sicily after Syracuse’s, the Greek-Roman Theater is able to hold over 4,500 people not only for concerts, but also for events like the Taormina Film Fest, and, in 2017, the 43rd G7 summit. This is a great place to attend an event, or even just stop by to bear witness to the 2,300 years of history that make up these grounds; the epitome of the GreekRoman architectural legacy.

Taormina has loads of fun things to do. Now it is just up to you to decide how you want to spend your time in this amazing and unique place.

It may also interest you:

Taormina, Sicily is an ideal location to study abroad for a semester or yearlong program for the student who is interested in total immersion into the Italian culture and language. Host families extend learning during relaxed dinner conversations during the traditional Sicilian meals provided.

Studying Italian in Sicily Beyond any Stereotype!
5 April 2022

How long does it take to get to the next level of Italian?
9 August 2019